This episode is filled with another set of interviews from our trip to Cryptic Studios! We’re talking to artists, animators, and system designers…But, before we jump in to that, we Trek Out news that Nickelodeon is getting a Star Trek animated series for kids, CBS shares some numbers about All Access, and – thanks to you – we hit our fundraising goals!

Later, in On Screen, we cross the mycelial network in Season 2 Episode 5 of Star Trek: Discovery, “Saints of Imperfection”.

It looks like a Star Trek animated series may be heading to children’s television. Several trade publications, including Deadline, The Hollywood Reporter, and Variety – have reported that CBS TV Studios is currently in negotiations with Nickelodean, and writers Kevin and Dan Hageman of Lego Movie fame, to produce a Star Trek animated show. Details are currently under wraps, but it is expected to be a “kid-focused” show.

At CBS All Access, business is booming. If you’ll recall, CBS had set a goal of 8 million subscriptions for Showtime and CBS All Access by 2020…and the company hit that mark two years early. Business Insider lists 3 major contributing factors that, they believe, have lead to the companies streaming success: timing, brand strength, and original content. The article notes that the “Twin Peaks” and “Star Trek” revivals have driven “palpable” growth for Showtime and CBS respectively.

And last, but certainly not least…The best news of the week is that we hit our goal for our Extra-Life Campaign!! Thanks to the support of our friends and listeners, we raised over $1,701 for The Children’s Hospital of Philadelphia during our 12-Hour livestream on Saturday, February 16th! Now, if you weren’t around to donate during our livesstream, that’s okay! The nice thing about Extra Life is that donations can be made throughout the entire year! So even though we can’t incentivise you anymore with giveaways from our friends at Roddenberry, Star Trek Online, or GamePrint, you can still support the cause and help save a child’s life! So head on over to our Extra-Life donation page and consider contributing!

Take part in our Listener Survey! This is a very special 400th episode of Priority One, so things are going to be a little different. We’re skipping Trek It Out [...] 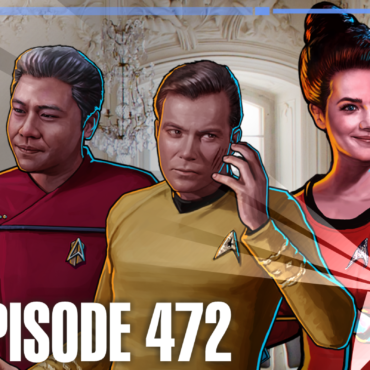