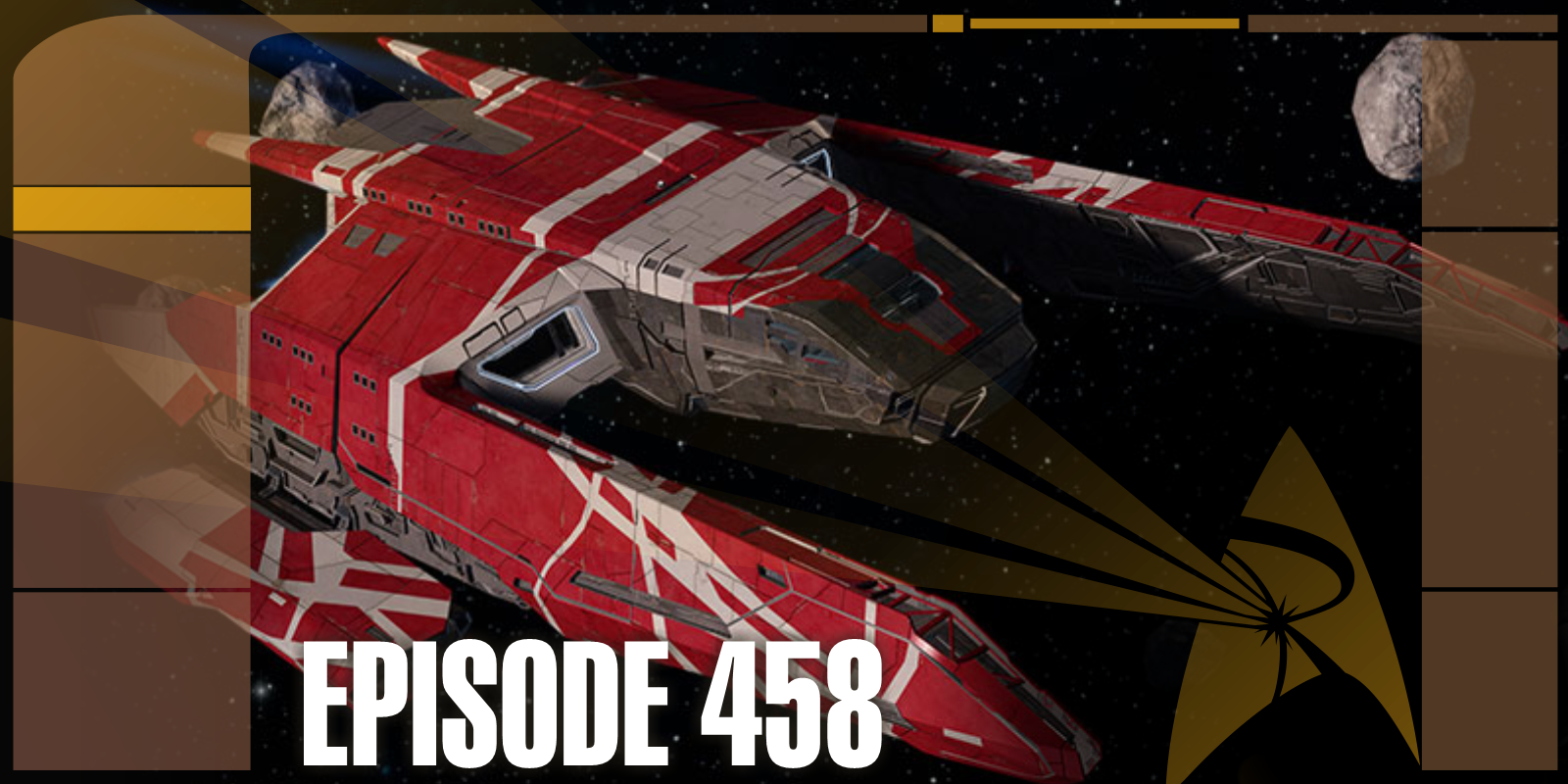 This week on Priority One — We trek out Comicbook.com’s interview with Jonathan Frakes, STLV 2020’s future, how “The Saint” might save Kirk, and Quarantine pastimes. In Star Trek Gaming, Herocollector opens Star Trek Online ships for pre-order, and La Sirena flies! Then we open hailing frequencies for your incoming messages!

CQ: Will you be purchasing tickets for Star Trek Las Vegas 2020?

CQ: Will you be purchasing “La Sirena” in Star Trek Online?

These are trying times. It’s easy to feel lost and confused. Empty. But stay strong, this won’t last forever. Star Trek will RETURN! To help ease our no-new-Star-Trek-blues, ComicBook.com’s Jamie Lovett delivered a video interview with the iconic Jonathan Frakes.

Spoiler alert – if you haven’t seen Star Trek: Discovery or Picard, go watch them.  We’ll wait. Okay, good. Frakes and Lovett discussed the state of Star Trek and the tonal shift  Discovery will be experiencing in season 3. ’’At the end of season two, we flash-forwarded I think 930 years. Michael Burnham has found a new core, not to mention a new partner in crime. So again, there’s a big tonal shift on that show, less driven by the pain and guilt of her past and more about the magical reunification of the Discovery crew and wherever she went off to.[…] So those two things coming back together is very much the theme, and how grateful everyone is and what’s next. It’s got a lot of action-adventure and not so much pain.“

Frakes also talked about getting back in the center seat in Picard’s season 1 finale, ‘Et in Arcadia Ego, Part 2’ “That was a really different experience because I was alone. I was ‘self-directing.’ I was in a captain’s chair. I had a spacesuit on. I had my beard trimmed, my Riker hair put back on, my bald spots covered up. It felt very familiar, and it was like a flashback. Because of how well ‘Nepenthe’ went, I was less nervous and, I got to say, thrilled to have been asked back, to be perfectly frank.“

STLV Tickets On Sale, To The Surprise of Many

On April 17th, San Diego Comic Con announced that its 2020 convention – which was set to kick off July 23rd and run until July 26th – was cancelled. The news shook geekdom, but it was not terribly surprising, and most considered the move responsible. But what of the official Star Trek Las Vegas convention set to run just two weeks after the now-cancelled SDCC? Surely that would be cancelled too?  Right? Right?!? .

Wrong. For now,anyway. In an update posted to their web page and social media outlets, Creation released in part ”We hope you have been staying safe and healthy during this challenging time. While Creation has been social distancing as a team, we are still working hard to make the upcoming Official Star Trek Convention a grand celebration of Gene Roddenberry’s legacy for a hopeful future.  The event is set for August 5-9, 2020 at The Rio All-Suites Resort and Casino in fabulous Las Vegas[…]As something to look forward to this summer, we can’t wait to spend another truly intergalactic time in Vegas! Your devoted Trekker friends at Creation Entertainment”

The announcement was met with a wide variety of reactions, with most questioning the motives of the move. What do you think?

Chris Pine In Talks to Reboot “The Saint”

It’s been a while since we’ve discussed a possible Star Trek movie, and this story might be a reach, but it’s worth mentioning. On April 21st, Variety broke the story that Chris Pine – JJ’s Captain Kirk – was in negotiations to star in Paramount’s reboot of “The Saint”.

“The Saint” is a 1920’s book series, written by Leslie Charteris, featuring a Robin Hood-esq hero named Simon Templar. But the books, and their screen adaptations – starring Roger Moore and Val Kilmer – aren’t  the real story here. This is ”Paramount and Pine have had strong ties for many years. Their relationship goes back to 2009 when the studio hired him to play Captain Kirk in the latest “Star Trek” franchise, launching his career as a leading man in the process. While the fourth “Star Trek” film is still being developed, the studio saw “The Saint” as the perfect role for Pine as they wait for that script to be finished.”. Does this confirm that Noah Hawley’s Trek will star the Kelvin cast or is the reporter speculating? Only time will tell!

You’ve watched every Star Trek series. Three times. All the way through. And quarantining is Driving. You. Bananas. So what do you do with your time? Star Trek alumni may have some suggestions for you!

IGN asked Star Trek’s Discovery and Picard casts what they’re binging during this era of social distancing. Sonequa Martin-Green, Brent Spiner, Jeri Ryan, Isa Briones, and others talked about the movies,shows, books and games getting them through Covid-19. To find out who’s go-to show is “The Office”, or who ISN’T playing Star Trek Online – hint: it’s all of them – trek out the link in our show notes!

If you’ve been staying up-to-date on Star Trek merchandise and STO news this year, you’ll know that Hero Collector has announced seven Star Trek Online models joining their Eaglemoss collection. This week Hero Collector and Cryptic Studios officially announced pre-ordering for the first two ships in the collection. The Gagarin Miracle Worker Battlecruiser and the Chimera Heavy Destroyer can be pre-ordered now for $29.95 from Eaglemoss.com. The other five ships still to come are the Enterprise F, the Andromeda Exploration Cruiser, the Bortasqu War Cruiser, the Vastam Tactical Command Warbird, and the Pathfinder Long Range Science Vessel.

If you’ve been eagerly waiting for the ships of Star Trek: Picard to make an appearance in Star Trek Online, then the latest news from Cryptic should excite you. On Tuesday, March 28th, Ambassador Kael posted a blog announcing the release of the T6 “La Sirena” Heavy Raider. The ship reproduces in great detail Captain Cristóbal Rios’ La Sirena. However, Cryptic Lead Artist Thomas Marrone pointed out in a tweet that “The STO version is not the same exact type of ship as the original La Sirena. It’s significantly bigger, about 30-40 meters longer, so that it can be considered a “capital ship” in STO. You’ll notice we scaled the window down to illustrate this.”

There are a number of interesting points to the stats and capabilities of this new ship. For starters, the ship has only four Bridge Officer seats, but two of these are Commander seats.As a heavy raider, the ship has a 5 forward weapon  but, only a 1 aft weapon, with an Experimental Weapon slot and Improved Raider Flanking. The ship also boasts Pilot Maneuvers. It’s interesting to note that while the Bridge Officer layout of the ship appears limited, it seems the ship’s new Universal console and Starship Trait are designed to greatly improve Bridge Officer ability cooldowns. To see the full stats, Trek out the blog link in our show notes.

La Sirena will be another new Tier 6 ship joining the ever-growing T6 Promotional Ship Choice Pack, and as such is only available through Promotional Research and Development Duty Officer Packs. You can also purchase the ship on the in-game Exchange, though such Promotion ships are typically upwards of 1 Billion EC.

Next weekend, May 7th through May 11th, PC players will have a Research and Development Weekend. During the event, you’ll earn 50% more XP from R&D Schools, as well as bonuses to R&D materials packs obtained through the C-Store and in-game. Material harvest nodes in Ground and Space missions will also reward bonus R&D materials, Dilithium ore, and possibly an upgrade Catalyst.

As we rapidly approach the end of STO’s “Winter in Spring” special event, are you struggling to get your hands on enough Winter collectibles to claim the 200 Lobi event prize? If so, or you’re new to the STO Winter Event, we have a reminder for you. One of the fastest ways to earn the holiday items is through the Duty Officer assignment system. Just transwarp each of your game characters into the Winter Wonderland, and open the Duty Officer assignment system. From the “Current Map” tab, start all of the assignments available. The assignments vary in duration and amount of collectibles rewarded. But with just a few alt characters chipping in, you’ll be able to collect holiday items much faster than through event grinding alone.

Happy Holidays in April! And grab that 200 Lobi while you can!

Chances are you’ve heard of digital storefront Humble Bundle. Where Humble Bundle typically deals in software bundles, similar storefront Bundle of Holding deals in tabletop RPG products. And right now is a great time to Trek them out, because they’re offering fourteen Star Trek Adventures products from Modiphius Entertainment. By contributing the minimum of $19.95, you’ll receive PDF downloads of seven game source materials, including the Core Rulebook. If you contribute beyond the $40.58 threshold price, you’ll be able to download a lovely family of space salamanders and their offspring. Wait, no, sorry, wrong threshold. What you’ll actually get is the “Gamemaster Collection”, including the Beta Quadrant Sourcebook, several game scenarios, and the Gamemaster Screen. The whole bundle at retail is priced at $155. All products are offered completely free of DRM, for ease of movement across your devices. Ten percent of every contribution to the bundle, after fees, will be donated to Vision Rescue, a charity chosen by Modiphius Entertainment. 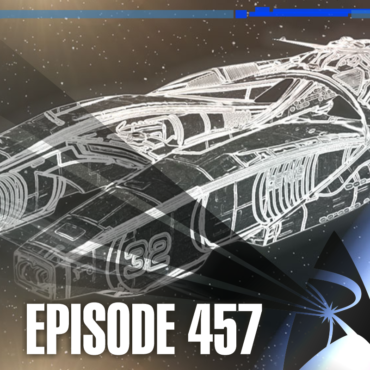 We trek out Rosario Dawson’s Star Trek ambitions a couple of Star Trek alum hope to return to their former roles, and homages galore! Star Trek Online lifts our spirits […]