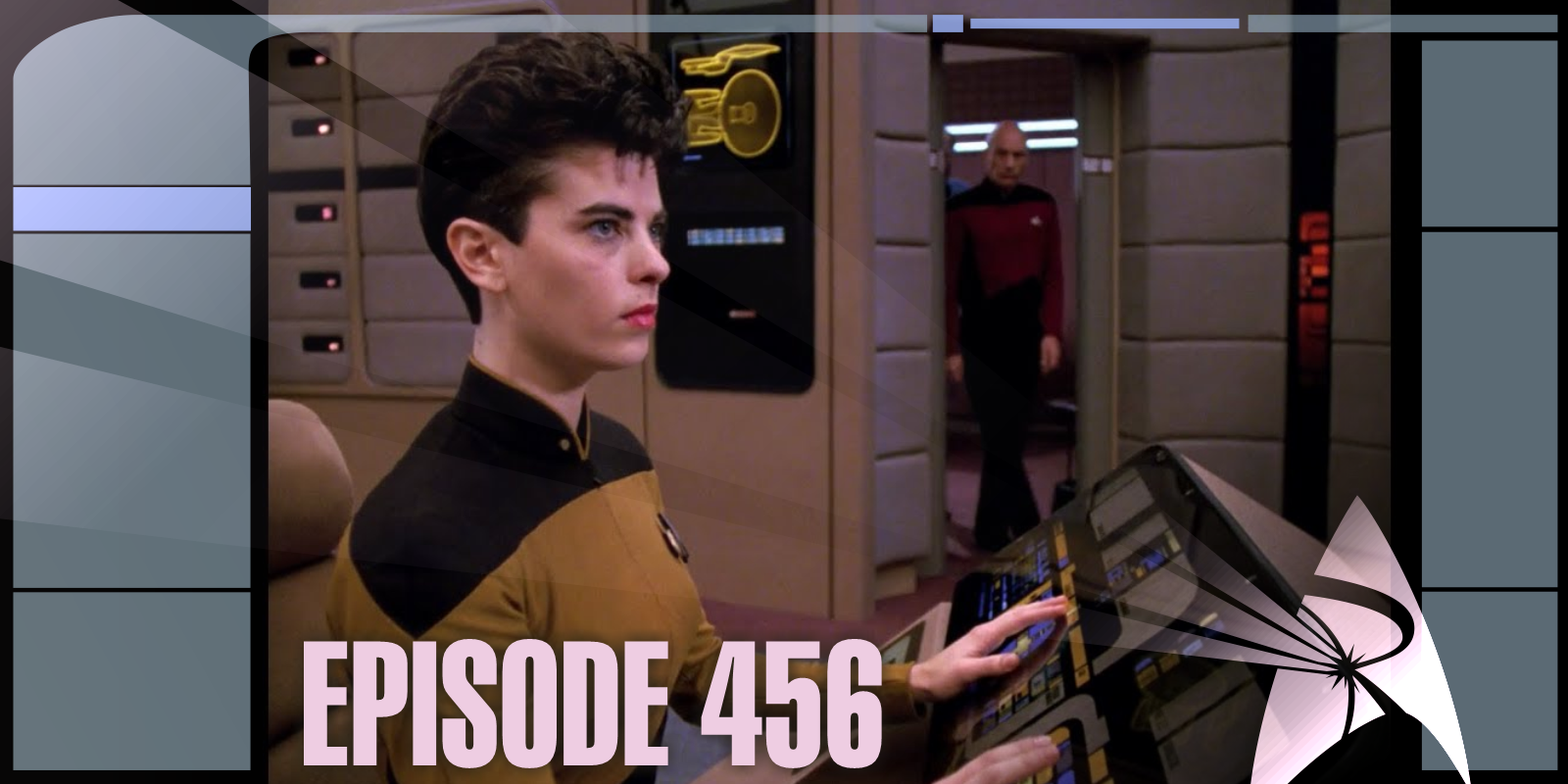 This week on Priority One — DS9 & Voyager get an HD remastering (sorta); We learn what S2 of Picard won’t be about; First Contact giveaways and events are still going strong in Star Trek Online while on the mobile platforms, Timelines and Starfleet Command get some interesting updates; then, we’re pleased to have with us Star Trek TNG’s Lt. Jae — Tracee Lee Cocco!

CQ: How impressed are you with the A.I. update to DS9 and Voyager. Does it make you pine for a HD release of both series?

CQ: Will you be getting your hands on the D’Quarka?… the new T6 D’Kora Update.

DS9 & Voyager get a Hi-Def Treatment

When Star Trek The Original Series and The Next Generation were given the hi-def treatment — breathing new life into both series in stunning high-definition — it didn’t take long for fans to start asking… when are we getting DS9 and Voyager?! Unfortunately, that wish might never be granted — at least not according to Robert Meyer Burnett — the writer, director, producer and editor of the bonus features included with The Next Generation and Enterprise Blu-ray releases. You see, back in 2017, Burnett went on record to explain that remastering these series is expensive and time consuming — but, mostly expensive… and the return on investment wouldn’t be the same as with the other – more popular – series.
However, a couple of fans took it upon themselves to apply some machine learning and digitally enhance several scenes from DS9 and Voyager into 4K Resolution. Last year, a fan that goes by CaptRobau uploaded a couple of comparison videos with scenes from DS9. Now, Billy Reichard ran a similar process to a couple of scenes from Voyager.

While we’re on the topic of technical advancements, COVID-19 has disrupted our daily lives in an unprecedented way. Many of us are adjusting to “Work From Home” scenarios and might even find themselves sitting in front of their laptops using a program like Zoom for work meetings… Or podcast production…. Well, if you happen to use Zoom for work, why not liven up that boring bedroom background with something more… Stellar?
Via twitter, Star Trek released a few images that can be imported into Zoom and configured to be a virtual background! Now, Zoom already has this feature built in with some default backgrounds but, you can import these new images to set a more colorful stage! Why not set yourself in Chateu Picard? Or in a corridor aboard the Discovery?
Either way, these are definitely a fun way to liven up those boring Zoom meetings… which could have probably still been addressed in an email… just sayin’

Now that Picard has wrapped up it’s first season, the big question on everyone’s mind is — what’s coming in Season 2. Although Chabon and Goldsman have explained that ideas are starting to formulate, Sir PatStew can tell you what it won’t be about… Pandemics. Now – although Sir Patrick has gone on record explaining his goals for Season 1 of Picard and how contemporary issues affected the themes of the first season — he doesn’t believe tackling a pandemic storyline would be appropriate explaining “This is a disturbing and frightening and sad time for many thousands of people… It is too sensitive, too upsetting, too frightening, I think.”

While we’re on the topic of future productions, Star Trek Picard’s composer – Jeff Russo – chatted with flickeringmyth.com to talk about his involvement with the Star Trek Franchise…. Including his connection to Noah Hawley — who is supposed to take the director’s chair on the next Star Trek Film. The question — has Russo spoken to Halwey about the next film. His reply “I have! We have spoken about it, and we’ve talked what he is going to want from a musical perspective, and how to approach it, and what the story is looking like it’s going to be, which is extremely exciting to me… He’s one to definitely talk about music with me, so when he called to say that his film was in the works, I was extremely excited.”

Calling all Television Content creators! The Roddenberry Foundation and social impact agency Propper Daley’s A Day of Unreasonable Conversation have teamed up for this year’s Roddenberry Impact Awards. Ten awards of $10,000 will “be granted to television content creators who are committed to – and have innovative ideas and approaches for – reimagining the processes for writing and telling stories that better represent the diversity of people, thought, and expression throughout society.
Those of you interested in applying have until May 8, 2020 at 5pm PT — and remember — the goal of the event is to //quote// unlock social progress through the power of stories //end quote//.

A free giveaway has just begun on April 9th for Console Captains, running for two weeks. Players can claim a free promotional Borg Pack once per account. The pack contains:

And though the PC giveaway started last week, it’s not too late to grab your Borg Pack there, either. The PC giveaway continues through April 16th.

All around the Galaxy, space stations, academies, bases, and back alleys were immersed in Klingon Culture last week! To celebrate April Fools Day, Star Trek Online gave players a game-wide Klingon Concertina Festival. NPCs all over the galaxy could be found trying their hands at the Klingon squeeze box and singing Klingon music (sadly with no audio).

Also in the April Fools spirit, Kurland was back on DS9’s Promenade. Interacting with the famous Starfleet Captain would get you a “Mysterious Box” and a free Dab emote. The Mysterious Box, when opened, would randomly present you with another “Mysterious Box” or an impressive explosion! It’s probably safe to say this was Kurland’s revenge for all the abuse he took during 2018’s April Fools Day.

The in-game calendar on PC shows a couple of events coming up.

First, we have a 3 week “Bonus Experience” event starting April 24th. During this event, players earn an extra 100% bonus Experience throughout the game. It’s a great time to level up a character or start a whole new character. It’s a little unusual for this event to be 3 weeks long, so stay tuned for any related news from Cryptic on this one.

Starting on April 30th, we also have an “Item Upgrade” weekend through May 4th. During this event, item upgrade tokens provide 100% more Technology Points. Get your Phoenix Upgrade tokens ready to burn, Captains!

Star Trek Fleet Command has announced a new feature designed to make the game more friendly to referrals. Players who join the game now can choose what server they’re attached to. This lets a new player join the specific server where a friend already plays. For a limited time, players who refer a friend will also earn rewards when that referral reaches level 10 in the game or makes in-game purchases. The reward for your first referral is 800 Ultra Recruit tokens and a Reward Chest. Additional Reward Chests can be earned on your 3rd, 6th and 9th referrals. The reward earned by a referral purchase is a special Uhura game avatar.

This promotion ends April 15th, and referrals must reach level 10 by then to qualify for rewards.

Star Trek Timelines has announced the theme of April’s Mega-Event, “Double Jeopardy”. This story event will focus on the knowledge of the U.S.S. Discovery becoming public again, and an ensuing push to ban synthetics. The event will feature crew from both Picard and Discovery, and will give bonuses to all crew with the Cyberneticist trait. The Soji crew card will be the recurrent threshold reward for all four events this month.