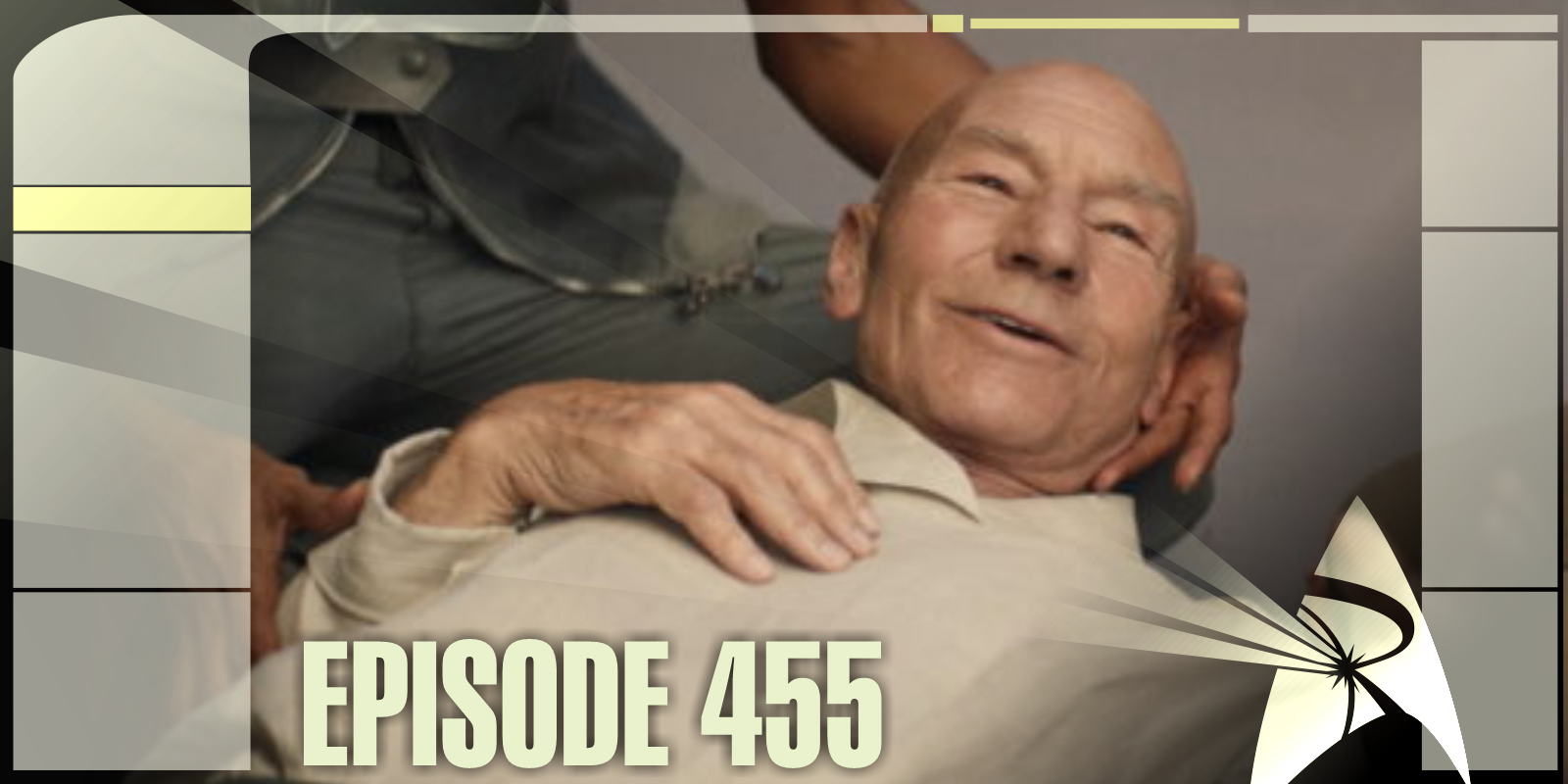 This week on Priority One — Season 1 of Star Trek Picard is over and now the post-season interviews are all over the net — including interviews with the showrunners; in Star Trek Online, First Contact Day is around the corner and STO has started teasing event information — we’re also joined by Star Trek Online’s Senior Content Designer, Ryon Levitt to chat about creating engaging missions for players… And of course — in On Screen, we dive into the two-part finale of Star Trek Picard, Season 1.

CQ: Would you be excited to see Brent Spiner return as a Soong?

CQ: Will you be getting your hands on the D’Quarka?… the new T6 D’Kora Update.

“Star Trek: Picard” aired its final episode of season 1, “Et in Arcadia Ego: Part 2”, last week. We’ll get into what took place on Screen later in the show, but for now let’s have a look behind the scenes. The Hollywood Reporter chatted up Picard series one showrunner Michael Chabon and Executive Producer Akiva Goldsman to hear more from the men behind the curtain. Be warned, spoilers incoming.

The pair cleared up confusion about the original plan for the length of Picard’s run, with Chabon saying ”We didn’t decide to do this to the character from a place of we didn’t want to have future seasons or anything like that. From the original plan for the show, even though our original outline changed significantly to what you eventually saw, the plan — and Sir Patrick’s plan from the beginning — was ‘let’s tell more stories with Picard.’”

Chabon discussed the serialization of Picard, and how it is received by Star Trek fans, saying “You really have to ‘bingewatch’ the whole thing in ten episodes. And it’s a tricky thing because of the whole episodic versus serialized way we watch things, and how especially Star Trek audiences are sort of trained [to expect] more of that episodic, mission-of-the-week structure. And that’s not what this show is.”

Finally, Chabon touched on the challenges of writing Picard Season 2, saying “First, it’s got to be good, right? It has to be focused on Picard but have room for all the other characters. It’s never going to be just a show about the crew of a starship that’s part of Starfleet and everyone’s wearing uniforms and they’re flying around, encountering alien life and weird planets. Those are the challenges we face going into season two, and I’m so excited about the story we’ve come up with.“

Akiva Goldsman WAS there, we promise. To read some of what he had to say, as well as Chabon’s thoughts on bringing back Jeri Ryan, trek out the show notes.

While we promise there was a quote from Akiva Goldsman in the previous article, we guaranteed there isn’t any to follow. Chabon soloed with Variety and discussed Star Trek feedback, serialization, and the subtle inclusion of the LGBTQ community in Picard

Chabon told Variety that he read the conversations, critiques, and reviews of Star Trek – both new and old. He even went so far as to look up old Usenet boards focused on Star Trek: Deep Space Nine and Voyager, and was surprised to learn that fan reaction wasn’t so dissimilar thirty years ago. There was a certain demographic Chabon didn’t mind upsetting //QUOTE//”To the extent that I was aware of the kind of toxic fandom, the anti-SJW, you know, sad little corner of fandom — you just disregard that. Sometimes you’re motivated to have things simply because it’s possibly going to piss off or provoke people who seem to have missed the memo about just what exactly “Star Trek” is and always has been all about.”//END QUOTE//

When considering fan discomfort in a darker Star Trek tone, and more broadly serialization, Chabon said //QUOTE//”It’s a little weird for me, too. […] I can feel this deep wiring in my brain that wants “Star Trek” to be episodic. I can remember how odd it felt watching those serialized episodes of “Deep Space Nine.” I wasn’t entirely sure I liked it then, either. It was so far ahead of its time. […] It felt appropriate, I respected it, and I understood it — and it made me uncomfortable as a “Star Trek” fan.”//END QUOTE//

Chabon also discussed a perceived lack of LGBTQ inclusion in Star Trek Picard, indicating it WAS there if you looked close enough //QUOTE//”We’re doing it in an organic way — what feels organic to me. […] In Raffi’s scene where she calls into Starfleet to try to get access for them to the Artifact […], the implication is there too in their relationship. But she doesn’t ever say, “I’m going to call this woman that I used to go out with,” and she doesn’t say, “Hey, remember me. I used to be your girlfriend.”//END QUOTE//

This article is LONG, and offers insight into Chabon’s least favorite social media outlet, what Picard looks like going into season 2, and how Chabon is handling the pandemic. Follow the link in our show notes to trek it out.

What’s Picard without Picard? The Hollywood Reporter sat down with the Picard portrayer and Executive Producer – Sir Patrick Stewart –  to talk Picard, uniforms, and Kirk?

In regards to filming the poignant final meeting of Picard and Data in “Et in Arcadia Ego: Part 2”, Stewart said “I was looking forward to it, not just because I get to work with my friend Brent (Spiner) again, but because the content of the scene was so serious, given that Picard — he knew this would probably be the last time he would ever see his friend.“

The interview took a decidedly reminiscent tone when Stewart recalled being “Quite cross” when refused one of his uniform costumes following the filming of TNG’s “All Good Things”, but was later gifted the threads on a late night talk show appearance. Stewart jests “I often tease my wife that I will one day wake her up one morning wearing that uniform, since she grew up watching The Next Generation with her family“

Sir Patrick ends the interview recalling the filming of Kirk’s death scene in Star Trek: Generations “It was an extremely potent moment, I have to say. Working with Bill, and being present when Captain Kirk finally came to an end. It was a great privilege.“

Spiner is done as Data

What would Picard be without Data…oh…right. Well – This week, TV Guide interviewed the 71-year old Spiner to talk his many roles in Star Trek

Spiner had glowing things to say about his last meeting with Sir Patrick’s Picard, telling TV Guide ”I think there’s something really profound about what Michael [Chabon] wrote for Data to say about those things that are fleeting, that mortality is what makes us human, and those things that mean the most to us never last forever. […] It felt very much like we were doing Next Generation. There was something very familiar about it and kind of natural that we should be sitting there having that conversation.”

Spiner, who has said on countless occasions that he would not reprise his role as Data, repeated that sentiment ”I wouldn’t really entertain the idea of doing it again because I just don’t think it would be realistic. So it seemed right to me to give him this more gentle sendoff, and it seemed right to me in the context of the entire season of Picard and what Picard himself had been experiencing because of the loss of Data. I think it allows him to feel okay about it too. So it seemed like the right thing to do.”

That doesn’t mean that Spiner is done with Star Trek though. When asked about possibly portraying Alton Soong again, Spiner said ”Absolutely. I love working with all of the people on the show. The new cast is fantastic. Obviously, to still be working with Patrick is a dream. Now there’s a character that could conceivably go on and continue, so of course I’d love to.”

Star Trek Online has posted the announcement for this year’s First Contact Day celebration event! The updated event, which runs from April 2nd through April 23rd, will include new mission content along with the annual Phoenix rocket launch contest. For the first time, players will have the opportunity to step back in time to April 4th, 2063, the day before the historic date when Zefram Cochrane took humanity’s first warp flight. Under the direction of temporal agent Daniels, we’ll team up with Seven of Nine to find and reverse changes to the timeline that The Borg have made…. All in an effort to finish what they attempted to do in the film — Star Trek First Contact. By completing either the new mission or the Phoenix Rocket Launch contest for a total of 14 days, players will earn the usual First Contact Day event bundle and a brand new Universal Console, The Temporal Vortex Probe.

This console provides passive bonuses to Exotic Damage and Temporal Operative Bridge Officer ability cooldowns, along with a turn rate bonus scaled by Auxiliary Power. When activated, the console launches a probe which opens a Temporal Vortex that travels toward a target’s location, inflicting damage and slowing enemy ships.

The event also includes the new standard Zen buyout and Bonus Dilithium payout options. For each day of progress, players will also have their choice of 17 new uniform badges. The badges teased so far in Kael’s Twitter post included Trill, Ferengi, Liberated Borg, and IDIC among several others. Kael also noted a couple of quality of life updates to the event.

<~~ April 4th 2063 was also the exact day the Enterprise arrived at Earth in ST: First Contact. Will we see the Enterprise or any of her crew? Will there be any surprise cast appearances? Are these Borg timeline changes setting up STO to diverge from the Prime Timeline? ~~>

Star Trek Online has also just announced the addition of a new Tier 6 ship to the Infinity Lockbox.  Along with adding the Kelvin Divergence lockbox prizes into the Infinity box, they’ve added a brand new Tier 6 Ferengi Marauder named after Quark himself.  The T6 Quark Marauder is a welcome T6 update to the T5 Ferengi D’Kora, including Commander Engineering/Miracle Worker and Lieutenant Commander Science/Miracle Worker specialist seating. The ship carries a 5/3 weapons layout, a 9 degrees-per-second turn rate, and the extra Universal console slot common to Miracle worker ships. Naturally, like all Ferengi vessels, it also includes a built-in Dabo table, Bank terminal, and Exchange terminal. To see the full specs of the new ship, Trek out the blog link in our show notes!

Late last week, Star Trek Online announced an immediate 3 week event, from March 26th through April 16th. Acknowledging that /QUOTE/ we’re all feeling the crush of being at home right now /ENDQUOTE/, the special event will reward 50% bonuses to content that rewards Fleet or Reputation marks. So, while you’re looking for something to pass the time stuck at home, maybe now’s the chance to finish those Tier 6 Reputations you’ve been grinding away at.

For our viewers who play Star Trek Timelines, this week sees the re-run of DS9’s baseball themed “The Galactic Series” as a hybrid faction/galaxy event. The event features special crew like Niners Ezri, Martian Quark, Nurse Garland and Niners Rom. Variants of these crew, along with crew possessing the Athlete trait, will receive bonuses during the event. 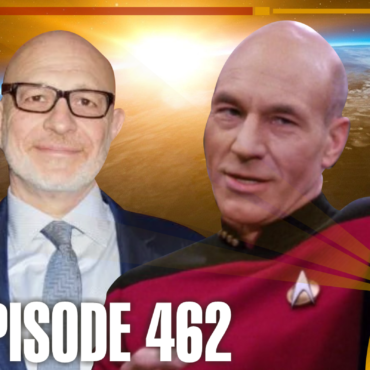